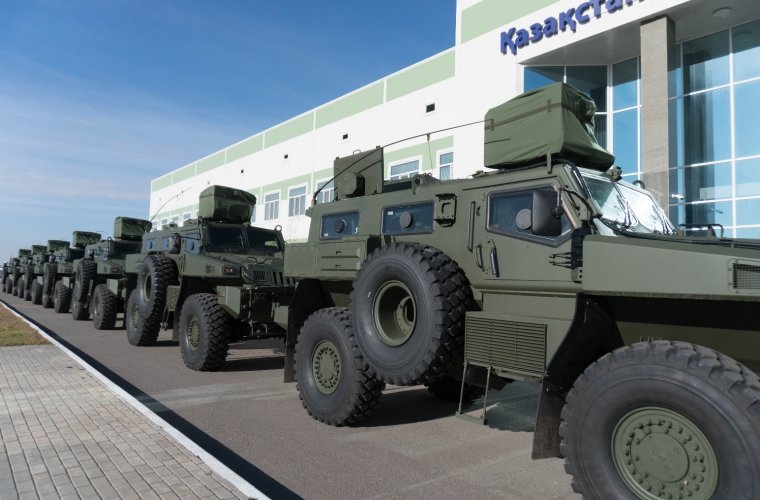 “Kazakhstan Paramount Engineering” Company has carried out the next delivery of “Arlan” armored wheeled vehicles to the Ministry of Defense of the Republic of Kazakhstan.

As a reminder, the previous batch of vehicles produced was distinguished by the adaptability of the “Arlan” AWV to Kazakhstan conditions: pre-start engine heating in the winter period of operation, an efficient heating system, Kazakhstan radio station, and “Arlan” armored wheeled vehicle was equipped with a combat module to control firing directly from AWV cabin.

New series of “Arlan” AWV of 2018 added a mechanical version of the combat module to the existing managed combat module which allows firing outside the cab of the vehicle behind STANAG-1 level armor, which provides a shooter with effective protection for combat in extreme conditions, in any weather, under large bias towards 360 °. This module is completely developed by the engineers of KPE design office.

Also, radiation, chemical and biological protection system (RCB) was introduced into the complex of Kazakhstani armored vehicle, which can meet the challenges of the spread of radiation dust, gas and biological attacks. Filter-ventilation equipment of the vehicle is able to clean the air for several hours.

The ergonomics for the crew is improved based on user feedback received and the heating system is modernized.

Along with this, a new batch of “Alan” armored vehicles was delivered to the special services of the Republic of Kazakhstan, which have high ballistic protection, reliable transmission, large capacity, maximum maneuverability for this type of vehicles, can be operated in a wide temperature range and reach speeds of up to 160 km/h.